Construction Dewatering Next to The Grand River 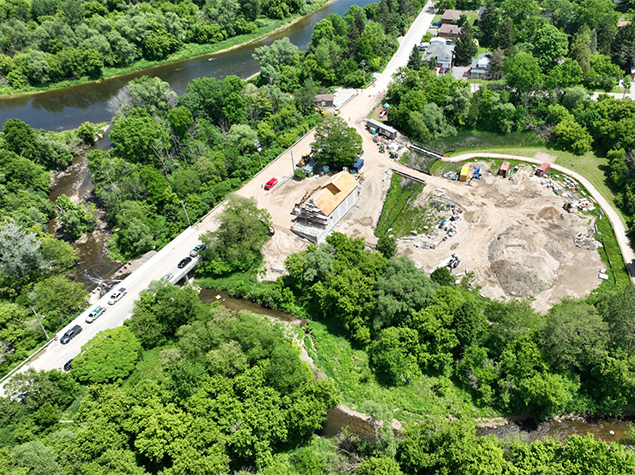 CONSTRUCTION DEWATERING NEXT TO THE GRAND RIVER

How much of an impact does a site’s natural setting have on the design of vertical infrastructure projects? Well sometimes, the impact is huge!

Thorough pre-design geotechnical and hydrogeological investigations are an important part of a Class Environmental Assessment (EA), as found evident throughout our time designing the Old Mill Pumping Station in Kitchener.

To service growth in the community and replace an aging sanitary pumping station, the City of Kitchener set out to construct a new station near the shores of the Grand River, Canada’s newest heritage river, and retained our team to complete the design.

One of the first steps of the project involved determining the size and location of the new pumping station, which was completed through a Class EA. Through technical analysis and public consultation, the pumping station service area was defined, the design flow rate was determined and a preliminary design was completed for a 150 L/s pumping station complete with an emergency storage tank.

Yet geotechnical and hydrogeological studies revealed soil and groundwater conditions that would prove to be a challenge for our team. Our design would require careful consideration of the natural setting – the river, a creek, impacted fill, deep excavation, and above all, excavation below the groundwater table in porous granular soil.

The team determined the preferred location of the new station would be about 100 m west of the existing station and on the opposite side of Old Mill Road. While the new site was further from the Grand River, it was closer to Schneider Creek and within the creek floodplain, but the new location was supported by the Grand River Conservation Authority.

This site also presented geological challenges as it is located on a glacial outwash area and contained coarse gravel and stone deposit that extended over 30 m down to the fractured shale bedrock, allowing groundwater to flow freely through the porous soils below the site.

Additionally, in the 1800s a series of dams were constructed along the route of the current Old Mill Road, creating a mill pond that eventually became known as Willow Lake. The pond was eventually drained and filled in the 1980s, while the Schneider Creek channel was straightened with erosion control and energy dispersion measures.

During the geotechnical investigation of the site, 4 m of fill was encountered below the topsoil and found to be impacted with metals, and polyaromatic hydrocarbons, among other parameters. This meant that the fill would have to be disposed of in a secure landfill. Fortunately, the groundwater testing revealed that it was not impacted by these contaminants.

During our design phase, we recognized that the site was small and the coarse grained soils allowed a high volume of groundwater flow, which demanded that a soil retention system be utilized throughout construction, as well as shoring method such as sheet piling or secant walls to allow excavation to a depth in excess of 12.5 metres below ground surface (mbgs). There was also limited space for stockpiling of excavated materials. This was mitigated through soil retention and to reduce the volume of soil that would be sent to a landfill.

Given the specialized nature of this work, along with the challenging coarse grained soils, our team and the City brought in a prequalified subcontractor, HC Matcon Inc., who used a vibratory sheet pile method that overcame the cobbles below the site while helping to reduce groundwater flow into the excavation. The sheet piles were offset from the double-formed cast-in-place structure. 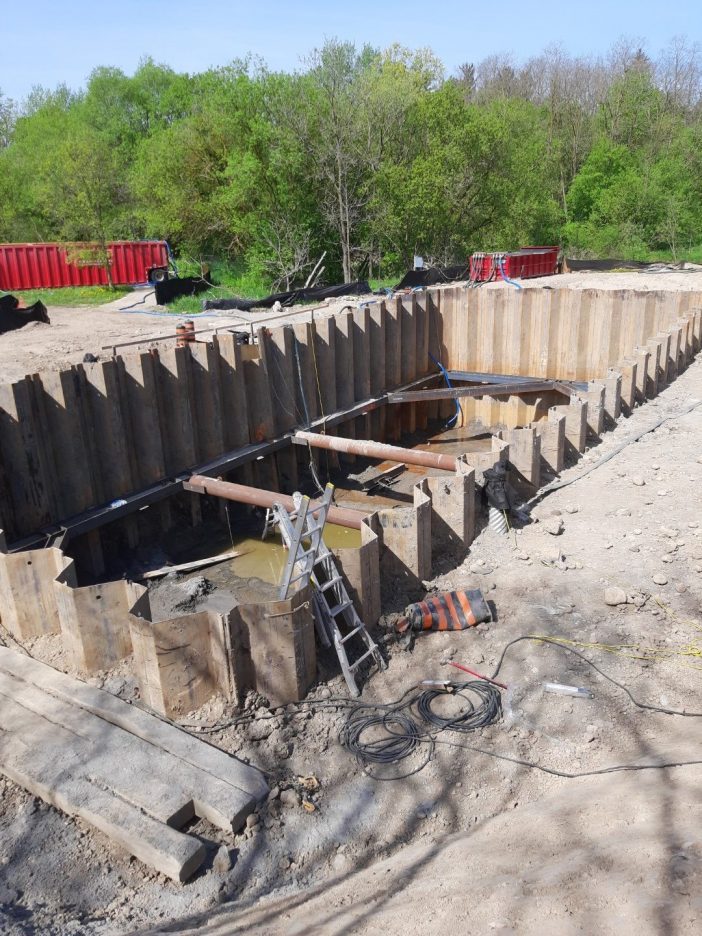 The location of the new pumping station is underlain by coarse grained sand, gravel and boulders extending over 30 m down to shale bedrock.

The geological challenges were amplified by the site’s shallow water table. At approximately 4.5 mbgs, the highly permeable granular deposits extended well below the base of the required excavation, some 12.5 mbgs.

It was important for the team to accurately understand the geology and hydrogeology conditions of the site. As a result, numerous boreholes and constructing monitoring wells were installed. Three monitoring wells were subjected to insitu hydraulic response tests to determine the hydraulic conductivity of the saturated native soils. In each well, a slug of known displacement was rapidly introduced (falling head test) and removed (rising head test) from the well as a means of inducing an immediate water level response.

The high water table necessitated construction dewatering. The team completed calculations to model a variety of construction methods, which indicated that, using standard open cut methods, estimated dewatering volumes were in the order of 10 million L/day. However, the level of confidence for the hydrogeological model was low because of the deep coarse granular deposit above the bedrock; there was no aquitard present.

Our assessment determined that a Permit to Take Water (PTTW) from Ministry of Environment, Conservation and Park was required; we requested 10,000,000 L/day as a conservative estimate. The permit outlined how the quality of the pumped groundwater would meet the Provincial Water Quality Objectives, and that a settling tank be provided and the discharge water was to be discharged onto the ground surface. The water would then flow 15 m overland, into the nearby Schneider Creek and subsequently into the Grand River.

At the start of construction, the prequalified subcontractor determined that sheet piling walls forming a closed box would be driven into the coarse granular deposits. The overburden would then be excavated from within the shoring in a controlled manner. However, there was no deep, low permeability deposit into which to seat the sheet piling walls, so they had to be terminated more than 2 m below the excavation base in the granular materials. With an essentially open base to the excavation, in order to control the natural hydraulic response of the water table to fill the shored excavation, dewatering estimates were repeated, revealing a reduced pumping volume of approximately 5,000,000 L/day.

Five 14-m-deep dewatering wells were installed outside the sheet piling box. With the base of these extraction wells being deeper than the sheet piling walls, the groundwater table was lowered sufficiently to prevent significant upflow of water from the base of the excavation. The wells were pumped at a combined rate in the order of 4 million L/day for more than five months. The pumped water volumes were within the pre-construction estimates and the excavation was completed in dry conditions. The groundwater was successfully lowered 6 m below the Grand River! 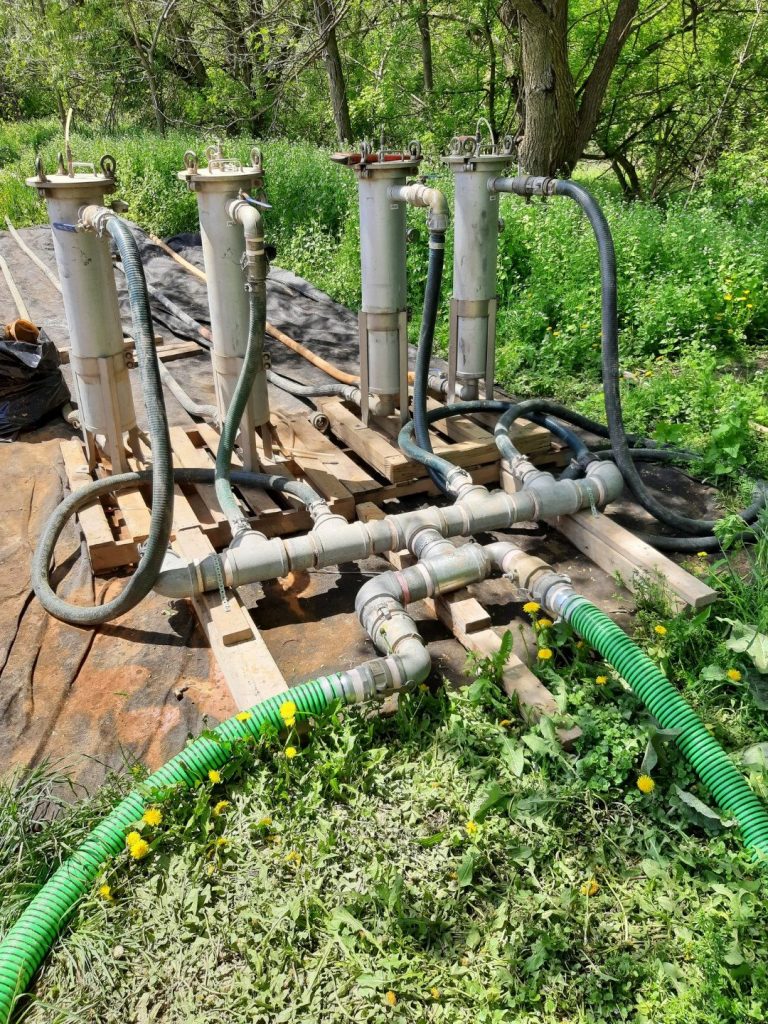 During construction, we discovered that naturally occurring iron precipitated in the discharge water from the dewatering operation. The PTTW planned for sedimentation tanks in an effort to reduce total suspended solids, yet the time in the sedimentation tanks combined with agitation caused the iron to oxidize and come out of solution. Due to its fine, colloidal nature, the iron did not settle readily in the tanks.

Our solution involved installing a mobile treatment process complete with its own Environmental Compliance Approval, allowing the sedimentation tanks to be removed and filtration added.

While designing the pumping station, we completed floatation calculations to ensure that the finished station would not float during flood conditions. The strategy for the grading plan involved filling the site to create a grade that was out of the regulatory floodplain. However, there is still a remote chance of site inundation. As such, our floatation calculations assumed that the groundwater could rise to the finished grade elevation, coupled with a building superstructure over the below ground structure of the station, adding deadweight which reduced the possibility of floatation.

During construction, the contractor, Stone Town Construction, requested to shut off the dewatering system when the structure was partially constructed. This would reduce operating costs and risks. For that reason, a new set of calculations to verify floatation of the partially constructed structure was not a concern. This required a prediction of the groundwater recovery elevation, as well as estimating the structure’s weight and accounting for the adhesion forces due to the backfill material. The calculations indicated that an appropriate Factor of Safety was available – the structure would not float!

The contractor was permitted to shut off the dewatering after the third pour of concrete was placed.  To enable a controlled recovery of the water table to pre-pumping levels, the dewatering wells were shut down individually over a one-week period. At the same time, water levels were monitored in existing sumps, dewatering wells, domestic wells and monitoring wells using dedicated pressure transducers programmed to record water levels on an hourly basis. The dewatering shutdown was successful and geodetic surveying indicated that the structure did not float.

The Importance of Pre-Design Investigations

Our experience designing this station is a standing reminder of the importance of a well-defined Terms of Reference for Class EAs, as well as thorough pre-design investigations and a willingness to adapt construction methods to address real world issues.

The Old Mill Pumping Station is currently under construction and slated for completion in Fall 2022. The structure has been backfilled, the masonry is being placed and the challenges of poor soils and high groundwater have been overcome!

Learn more about our involvement in the project.

Back to All News Stories