Choose to Challenge: In Conversation with MTE’s Female Leaders 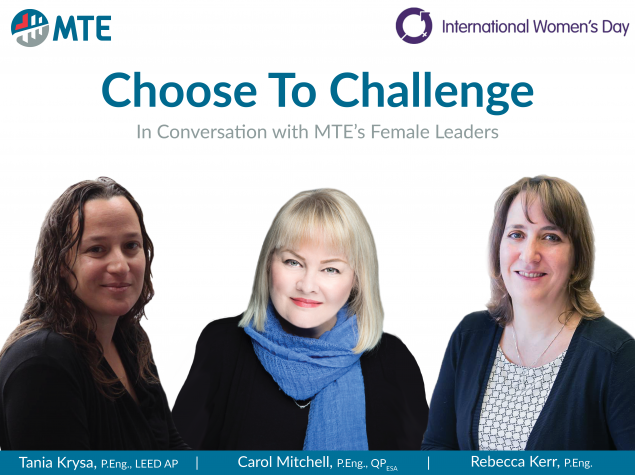 How far have we come in our effort to close the gap between men and women in STEM? Today on International Women’s Day, we are catching up with some of MTE’s female leaders to answer that question.

Carol Mitchell, Rebecca Kerr, and Tania Krysa are passionate about their careers. Although it may seem like they were destined for a career in engineering now, when deciding on a career path, engineering wasn’t the obvious choice.

Rebecca Kerr, Vice President at MTE, has over 20 years of experience in land development engineering. But it wasn’t until Grade 12 that Rebecca landed on a career in STEM.

“I remember talking to my guidance counsellor and saying ‘I don’t know what to do.’ I was very strong in math and science and she said ‘Have you ever considered engineering?’ and I said ‘I have no idea what that is but sure’.”

Carol Mitchell, Technical Director at MTE, has over 35 years of experience in environmental engineering, yet she was already in university when she rerouted her path to become an engineer.

“It wasn’t until my second year of studying chemistry when the professors came in and said ‘We don’t have enough people signed up for engineering chemistry, does anybody want to join?’. So, three of us went ‘sure okay!’.”

Tania Krysa, MTE’s Building Restoration Manager with over 18 years of experience in building science, was originally inclined to pursue a career in the arts until she was introduced to the idea of engineering by a co-worker.

“I always felt like a square peg in a round hole at university. However, following the stream of building science has been the perfect balance between my love of science and my artsy side.”

Despite showing strengths in math and science, all three women had not been greatly exposed to the option of engineering as a career path, and almost fell into the profession by chance. Careers in STEM were widely considered to be geared towards men in the past, so university programs were not directly recruiting women.

This is not the case today.

“I think the number of programs that engage young women in STEM has been the biggest change. There’s so much more awareness and with awareness grows interest … I think back sometimes and wonder what I would be doing if that guidance counsellor hadn’t said what she said. And I think that’s true for a lot of people because it’s all about who and what has influenced you. So, if there are more influences out there in the world, the better it gets.” – Rebecca Kerr.

While we have made massive leaps in promoting engineering to young women, they are faced with further challenges upon entering the field.

Whether it be having to work harder to gain trust, facing gender stereotypes and bias, or struggling to strike a balance between work and life, workplace obstacles often differ between men and women. Therefore, arming female engineers with the tools necessary to succeed sometimes looks different.

“We’ve been graduating great women out of engineering but there’s a piece that blocks them or stops them when they get to their career. So that’s where we need to focus our energy. We need to give them the tools to stay.” –Carol Mitchell

Junior women especially benefit from being given opportunities to lead. This is why Tania makes a point of instilling confidence in her staff by empowering them on site.

“In those initial meetings I have them do all the talking and I just chime in … It shows the people who are confident in me, that I’m 100 per cent confident in them, whether it be male or female. And specifically, if they are a woman, it gives them that extra boost and confidence.” – Tania Krysa

One challenge that has been specific to women, for the most part, is maternity leave and raising a family. While we’ve been seeing a shift towards equal parental responsibility, the onus can still fall on the woman.

“I know from direct experience that the whole baby era, if they choose to do that, is the most stressful time, especially in a consulting world. It’s so stressful trying to keep women engaged at that period in their life. I try to be very doors open and supportive. Over the years, one of the things I’ve been pretty vocal about in my position is accommodating leaves of any kind. Recognizing MTE is a family, but personal families are the most important thing. It’s all about figuring out how to make that person the happiest and most successful they can be, by accommodating their specific needs.” – Rebecca Kerr

It becomes truly apparent during moments of adversity, that when given the tools necessary to succeed, women will do just that. The shift to working from home this past year is a great example.

“I’m so grateful that young women can now work from home and it has proven how efficient they are and how their productivity doesn’t decrease. They can step into their new role and balance their personal and professional lives.” – Carol Mitchell

This Year’s International Women’s Day centres around the theme of Choose to Challenge. This is not just a call to action for women, but for the men who wish to help challenge the status quo that has created barriers for their female colleagues.

“Men need to have self-reflective conversations about whether or not they have biases and what those are. I’m pretty sure a lot of guys believe they’re good guys, and they are, but we all have a subconscious bias. So, I think to understand what those are for you as a man is the first place to start. If something triggers you in a meeting with a female, it’s a good point to stop and ask yourself ‘why did that trigger me?’.” – Tania Krysa

Choosing to challenge requires all of us to do our part in dismantling the barriers that keep us separated.

“Be your authentic self. Challenge the norm of what people think an engineer should be or any woman in STEM should be. Anybody can be anything. There doesn’t have to be a mold.” – Rebecca Kerr

“Every time you have a discussion and you’re reflecting on the things you’re doing, your processes, your work-life balance, whatever it is, you have such an amazing opportunity to change, grow, and make things better. If you’re constantly just accepting the status quo, it’s the death of you. You can’t grow without change”. – Tania Krysa

Back to All News Stories