Hanlon Creek Park is home to a splash pad that is enjoyed by the Guelph community throughout the warmer months. When the washrooms and splash pad had reached the end of their lifecycle, the City set out to not only to replace the facility, but also to enhance it with additional accessibility and sustainability features.

The City’s design includes added asphalt pathways, as well as accessible parking and ramps leading into the park. Two new buildings were constructed to house the splash pad’s mechanical systems and public washrooms. Working alongside a solar pergola, solar panels were installed on the washroom roof, allowing the new splash pad and holding tank off to operate using 100 per cent renewable energy.

Our team was able to support the City by providing civil and structural engineering services for the demolition, design, and construction of the renewed park.

Laying the groundwork, our civil engineers completed the site grading, servicing, and stormwater management design. Because the site was already designed for a splash pad, our team found that the existing sanitary and water infrastructure, which also serviced the original washroom building, could be re-used and relocated for the new washroom building and extended to service the new mechanical room.

Prior to completing the design of the new buildings, our structural engineering team assessed the existing structure in regards to its demolition. The 675-ft2 facility was a single structure with a mechanical room that stored equipment for the splash pad.

Our team then completed the design of the new facility, which is separated into two structures and joined by a large roof overhang. The roof doubles as a shelter and is outfitted with solar panels that power the splash pad. One structure contains three accessible washrooms, with the larger, centre washroom designated as a universal toilet room. The other operational structure contains a large mechanical space, electrical room and storage for the splash pad equipment and maintenance.

Our team provided support throughout the tendering process and completed construction inspections of both the civil and structural works. The park reopened just in time for the Guelph community to enjoy it during the summer months. 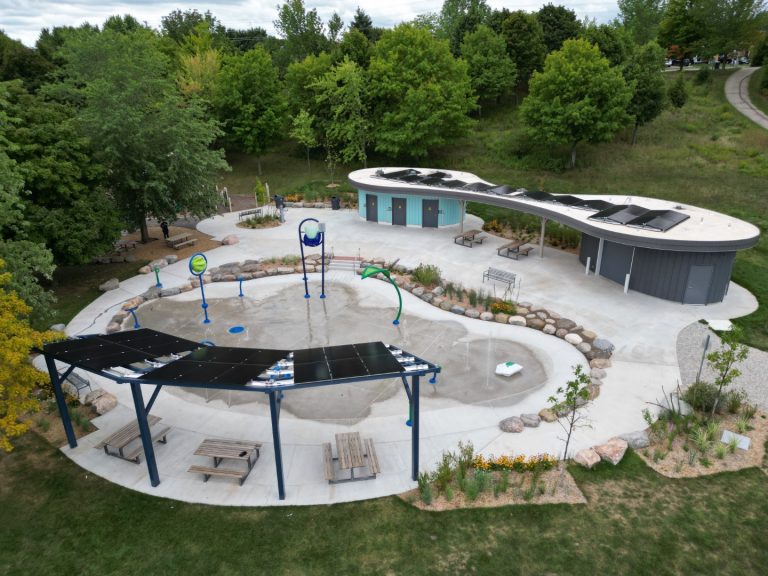