After purchasing the 175-year-old former Elora Mill property in 2010, Pearle Hospitality had a vision of fully redeveloping the north and south sides of the property that flanks the Grand River, into a one-of-kind destination.

MTE began working on Elora Mill in 2012, assisting our client, Pearle Hospitality, and the design team in overcoming several challenges associated with redeveloping heritage buildings along a waterway.

The first was to achieve the subwatershed approvals for Special Policy Areas by the Grand River Conservation Authority and Township of Centre Wellington that would allow for development within the flood fringe of the Grand River. Our civil engineering team achieved the Two-Zone Policy Area by conducting hydraulic modelling with HEC-RAS.

Our surveyors conducted an extensive topographical survey requiring in-stream water work that provided information for the design and construction of a new erosion wall, power plant and pedestrian bridge.

We also completed detailed grading, servicing and stormwater management design, including realignment of the storm sewer through the site.

Our structural engineering team worked closely with the architects as the plans for the project evolved. The team was tasked with keeping in mind the following objectives:

The development on the north side of the Grand River consists of five buildings: the Granary, the Coach House, the James Ross House, the Stable Spa and the Mill.

The exterior stone face of the Granary was retained using steel and concrete for the internal structure. Its renovation included construction of a new banquet and wedding facility.

The Coach House renovation included the addition of a two-storey addition containing nine guest rooms. While the James Ross House was restored as a 100-m2 (1,100-ft2) private suite

The Stable is located on a unique out-cropping over the river and was completely restored into a three-storey spa. The west end of the spa was built on 24-inch deep steel beams that cantilever up 10 ft past the cliff edge with a pool deck and hot tub built to suspend out into the gorge.

The stone exterior and timber interior of the Mill was completely restored including a steel and concrete addition for guest rooms and storage, as well as a three-storey cantilevered glass box expanding over the gorge.

To offset power used by the development, a 1-MW hydro plant was designed on the south side of the river. We designed a cofferdam to allows for the construction of the hydro plant below the water level.

The remains of the Potter Foundry have long resided on the south side of the Grand River, and with plans to develop a condominium on the site came an opportunity to bring new life to the ruins. The deteriorated limestone structure was first constructed in 1873 and has housed several industries over the years, remaining one of the few standing reminders of Elora’s industrial history.

The Potter Foundry ruins have become a landmark for hikers and trail users, yet with only rubble limestone walls and no roof, the interior has been left open to the elements and the structure was unsafe for public use. In order to preserve and give the structure back to the community, plans were put in place to carefully dismantle and reconstruct the limestone walls roughly 70 metres to the west of its original location. Some aspects of the structure are new but much of it is original and the roof has been recreated to its original design.

Our team completed the grading design and layout of the foundation for the new location of the structure. Working with the project team, we also coordinated a lidar scan of the ruin in its original location to aid in the reconstruction. Now complete, the reconstructed Potter Foundry sits along the trail system, open for the public to visit and reflect on Elora’s history. In recognizing the value and importance of this preservation project, the Heritage Centre Wellington has awarded the project team with the Heritage Professionals award. 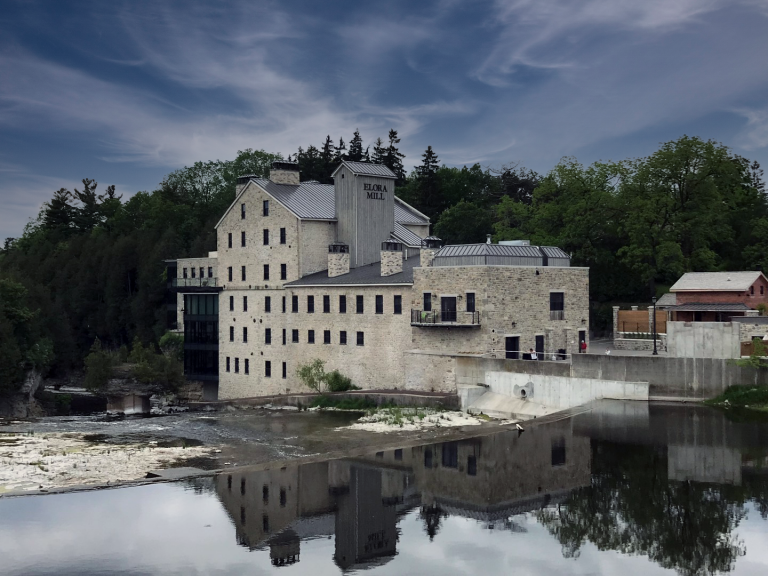