2020 marks MTE’s 35th year in business. However, like most things right now, the way we will celebrate our anniversary will not happen as we had planned. This doesn’t change the fact that we want to formally acknowledge this significant milestone for MTE and we still want to celebrate with our staff, clients and industry peers. Each of the next 35 weeks will be dedicated to applauding the people and profiling the projects from one year in MTE’s storied history. Let’s start with 1985. 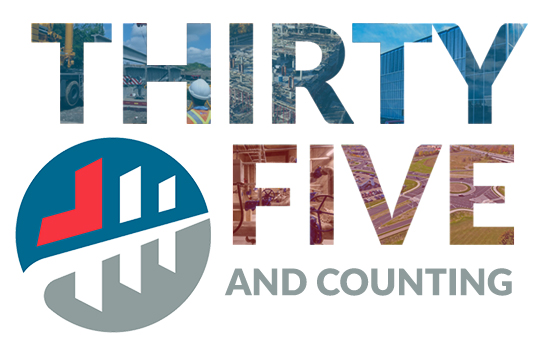 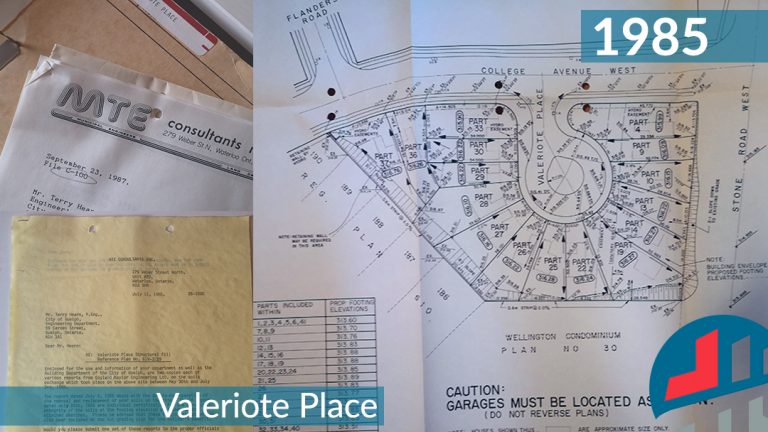 MTE’s first project was known as Valeriote Place, a residential subdivision located in the City of Guelph.

The first letter issued by MTE was dated July 11, 1985 and was addressed to Terry Hearn, P.Eng. of the Engineering Department at the City of Guelph. It was sent by our founder Bruce G. Scheifele, C.E.T. Interestingly, the letter is on thin yellow paper (carbon copy), the predecessor of the “CC” now commonly used in email communication.

It’s hard to write about 1985 without the primary focus being on the people who were essential in the founding of MTE. Bruce Scheifele founded MTE in July of 1985 and at that time was joined by Ron Beatson and Gary Honsberger. When Bruce named the firm “More Than Engineering”, he did so because he wanted his clients to know that MTE would always strive to provide the right solution while working together to ensure that their overall project objects were met.

Bruce deservedly retired in 2005 and we will always be grateful for his vision all of those years ago. Ron retired from MTE just last year after 34 years of dedicated service with the company, and Gary still enjoys working for MTE today! 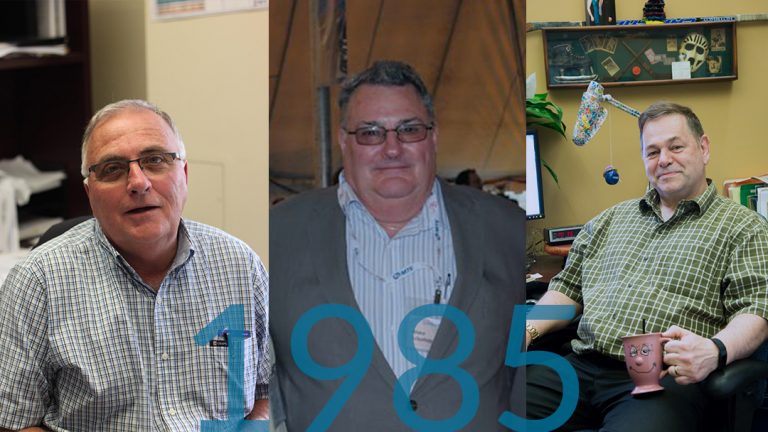 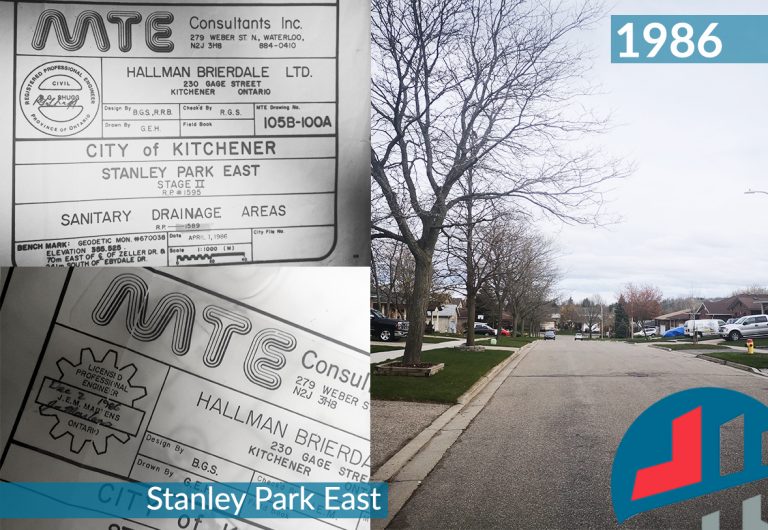 Stanley Park East is a 125-lot residential subdivision located off Lackner Boulevard in Kitchener. In 1986 the subdivision was being developed by Hallman Construction, which at the time was being led by Lyle Hallman who was renowned for his philanthropy. It was this generosity that inspired Bruce Scheifele to also build a reputation for MTE as community-focused organization; a legacy that we still epitomize in 2020.

Hallman Construction is now guided by Lyle’s son Jim Hallman, and is still a very charitable organization. We’re proud to still be working for them on projects across Waterloo Region.

Some of the early drawings for this project were stamped by Glenn Shugg, who was not an MTE employee. In fact, MTE did not employ a stamping engineer until 1986 when Jeff Martens was hired.

Jeff is still actively involved in the leadership of MTE and is the technical lead on many projects. He has inspired generations of engineers at MTE and helped establish our commitment to technical innovation and excellence. 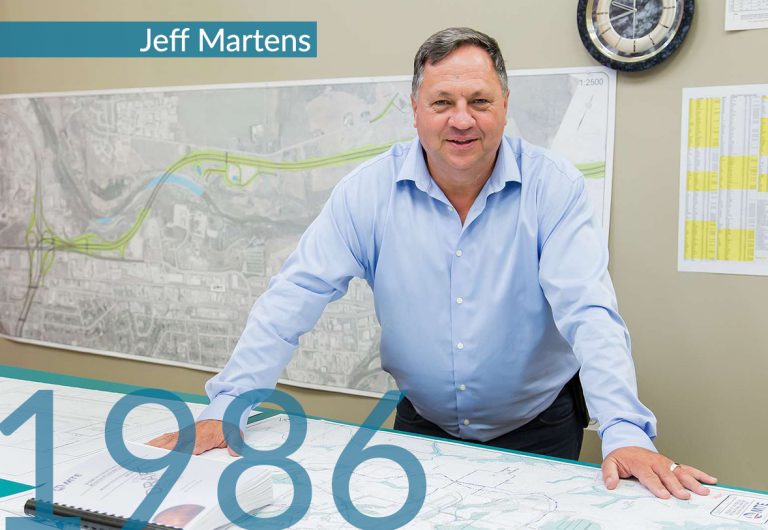 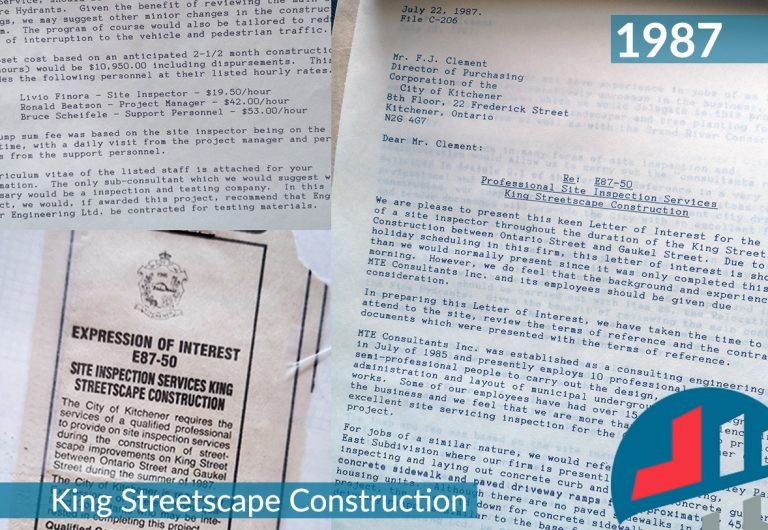 This week reveals that municipal proposals have always been a part of our business.

In 1987 we submitted a proposal to the City of Kitchener for inspection services for the construction of streetscape improvements on King Street. It was advertised in the newspaper, we obtained the paper RFP documents from City Hall and we submitted a typewritten proposal.

Today we receive notification of RFPs through various online platforms, we download the documents from the City’s procurement website and we submit them electronically.

Oh how things have changed (including hourly rates)! 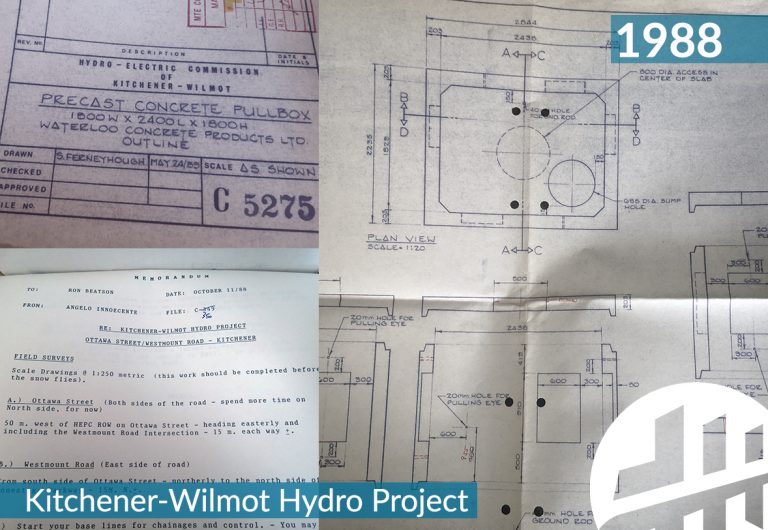 It didn’t take long for our founder, Bruce Scheifele, to start thinking about expanding. In 1988, with the hiring of Angelo Innocente, MTE’s journey as a multi-service engineering firm started to take shape. Angelo focused on work with clients in the public sector. One of the first projects he managed was the construction of hydro ducts and pull boxes for Kitchener Wilmot Hydro along Ottawa Street from Fischer-Hallman Road to Westmount Road. Angelo retired from MTE in 2011 and certainly helped shape what MTE is today.

As the company grew it naturally needed operational and administrative support. Gail Raddatz joined MTE in 1988 and continues to be a key member of our accounting team. 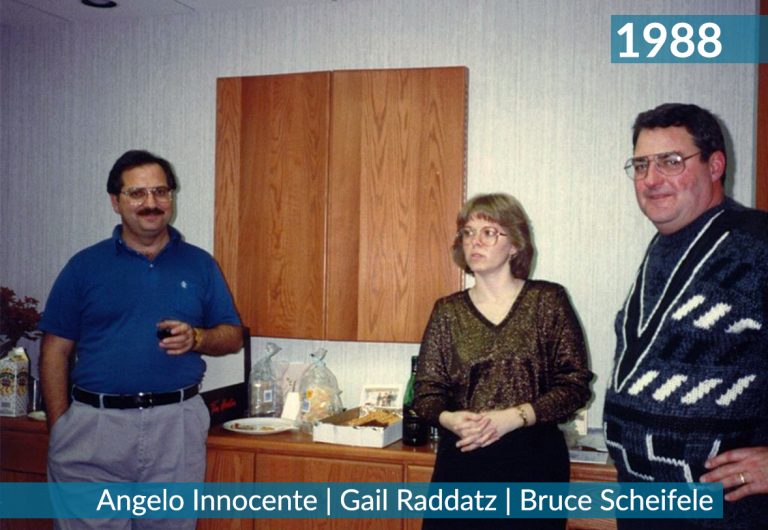 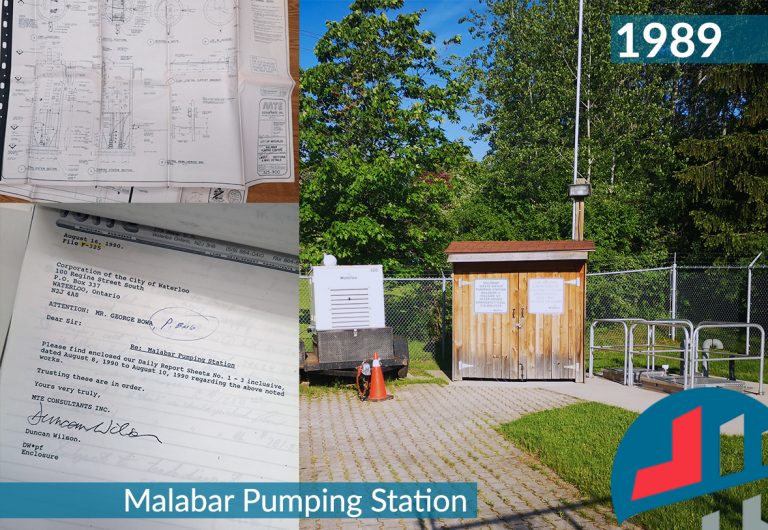 In 1989 we designed our first pumping station for the City of Waterloo. The Malabar Road Sewage Pumping Station was needed to support residences and development in the area of University Avenue and Lexington Road. The station had two submersible pumps, a forcemain and a stand-by diesel generator. 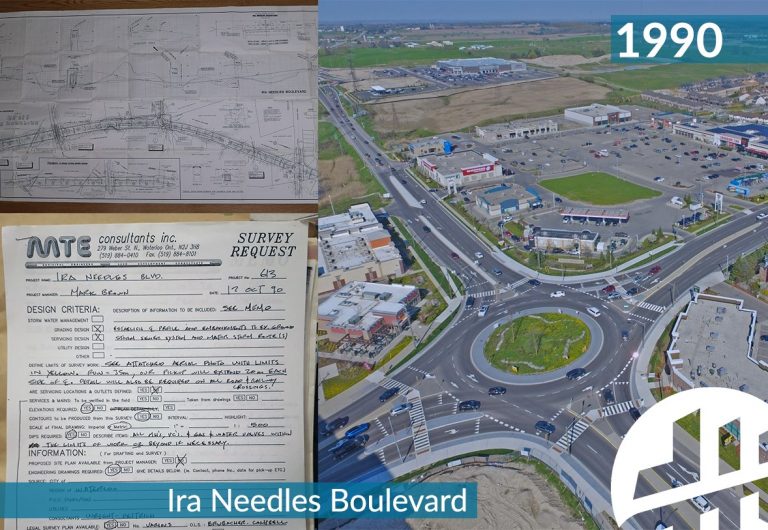 Our contribution to Ira Needles Boulevard goes back much further than roundabouts. Back in 1990, we started a project with the Region of Waterloo to survey and provide the preliminary design for what was to be a brand-new roadway.

At the time, the street was envisioned to have traditional intersections at Highland Road, Victoria Street and University Avenue. However, several years later our team completed the detailed design of the modern roundabouts that can be found along Ira Needles Boulevard today. 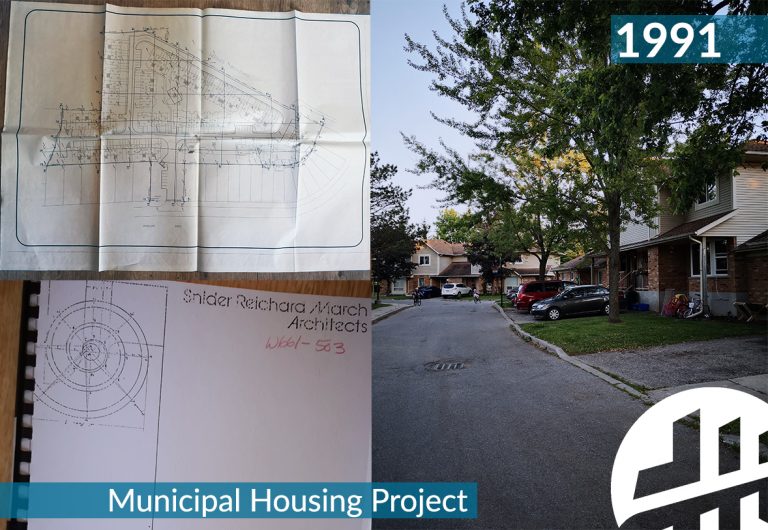 This residential townhouse project from 1991 reminds us of how long we have been working with some of our industry partners and clients. We were the civil engineering consultant on a team that was led by SRM Architects Inc. who designed this municipal housing project for Kitchener Housing.

1991 was also the year that Bill Douglas joined MTE as our first IT employee. Bill is still an integral member of our IT team today and was instrumental in our successful transition to working from home! 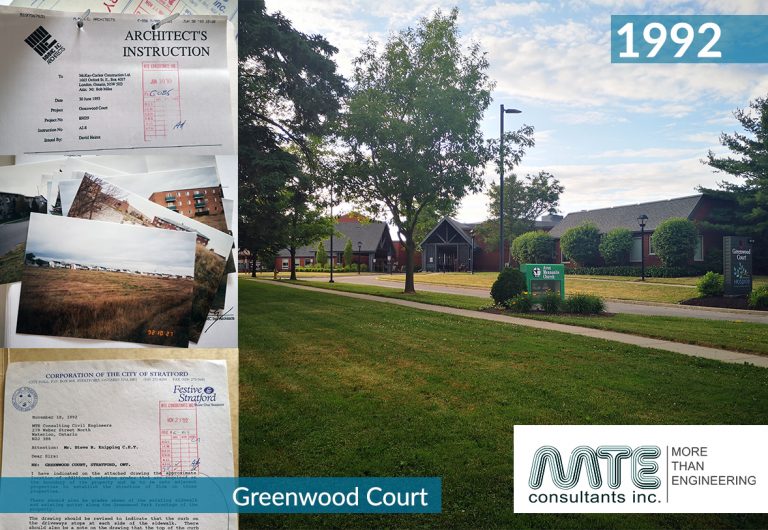 In 1992 we were the civil engineers on a team led by Mmmc Architects who designed the Greenwood Court long-term care home in Stratford. We still design many long-term care and retirement facilities today; many of them with MMMC as well!

This was also when we made our first branding change; transitioning the colour of the logo from orange to teal. 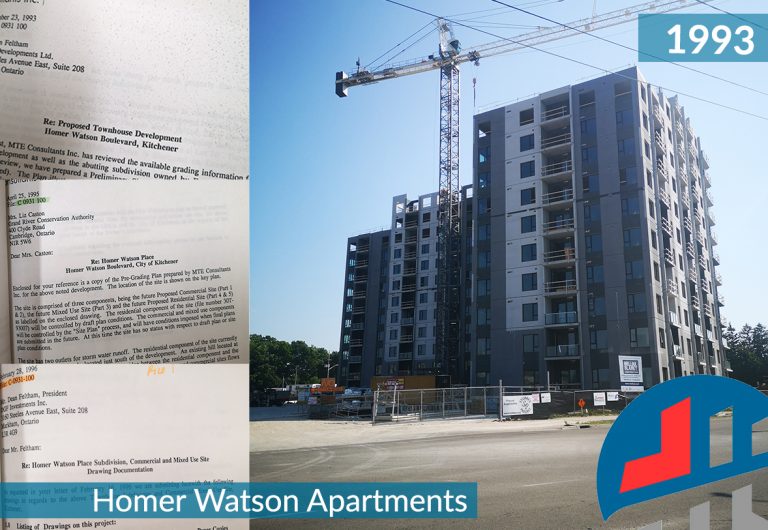 Our project from 1993 shows us how plans can change over time. This site at the corner of Homer Watson Boulevard and Block Line Road in Kitchener started as a townhouse development. Over the years the vision for the property was amended. Plans were updated to include commercial and office space, and then low-rise residential.

Today the site is under construction and will become two apartment buildings, one 12 storeys and the other 8 storeys.
In 1993 we were the civil engineers on the project, however, today we are not only providing civil engineering, but also structural and environmental engineering services.

Our client has also changed over the past 30 years. Today we are working for Northview Apartment REIT on a design and construction team that includes Melloul Blamey Construction and ABA Architects. 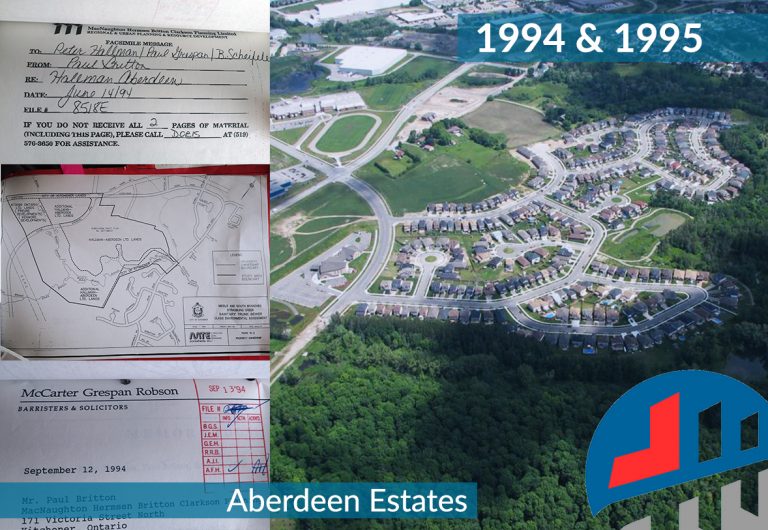 In 1995 we welcomed Valentina Lazic and Marie Sullivan. Today Valentina is the Manager of our Land Development Division in Kitchener, and Marie is our Corporate Secretary. 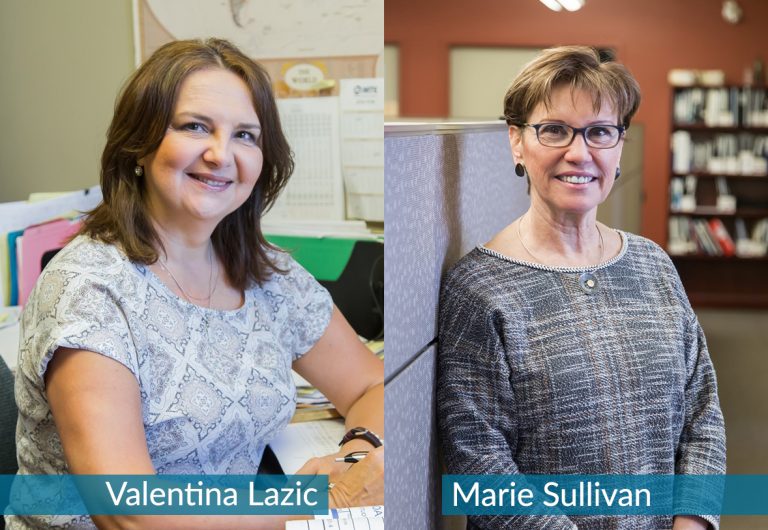 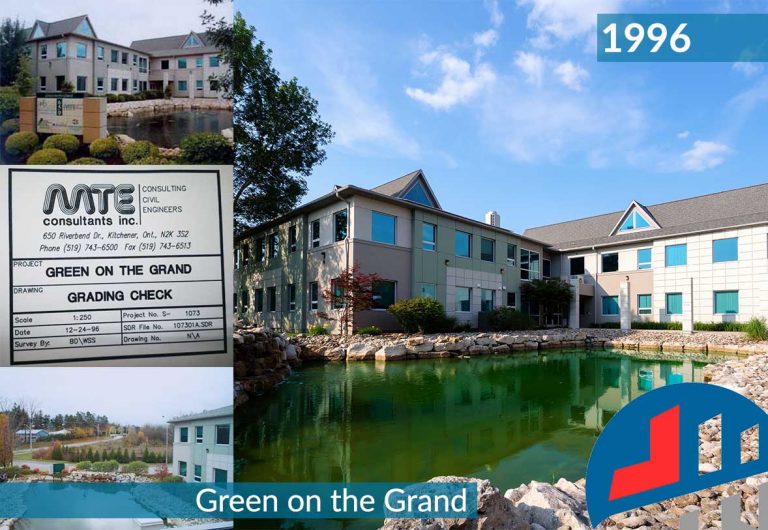 Green on the Grand is a 23,000 ft2, two-storey office building that was designed by a team that included SRM Architects, Enermodal Engineering, Ian Cook Construction, and MTE as the civil and structural engineers.

It was the first green office building in Canada and in 1996 became our new office. The design followed the Waterloo Region Green Home standards; it pre-dated LEED and similar rating systems that are used today. The team set out to create a building that had lower energy and environmental costs than conventional commercial buildings, while also promoting a healthy internal environment.

A pond at the front of the building was designed as a stormwater management solution, a cooling tower and a natural wildlife habitat. Rain water from the roof drained directly to the pond, and the mechanical system emitted excess heat into the pond which then dissipated through evaporation.

The building features laminated strand lumber beams and columns and was constructed almost entirely of wood as engineered wood is a renewable resource and is energy efficient.

In 1996 Scott Scheifele officially joined the company, although as our founder’s son, he was involved with the business from the start. He began as a Surveyor and today is CAD Practice Leader. 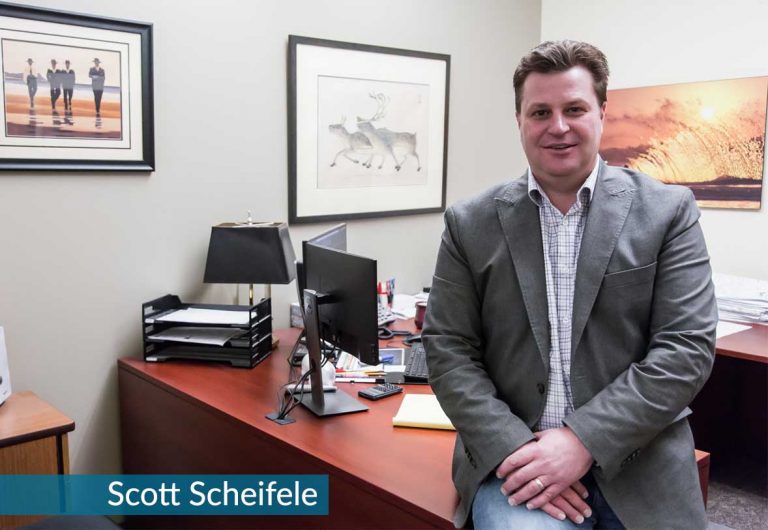 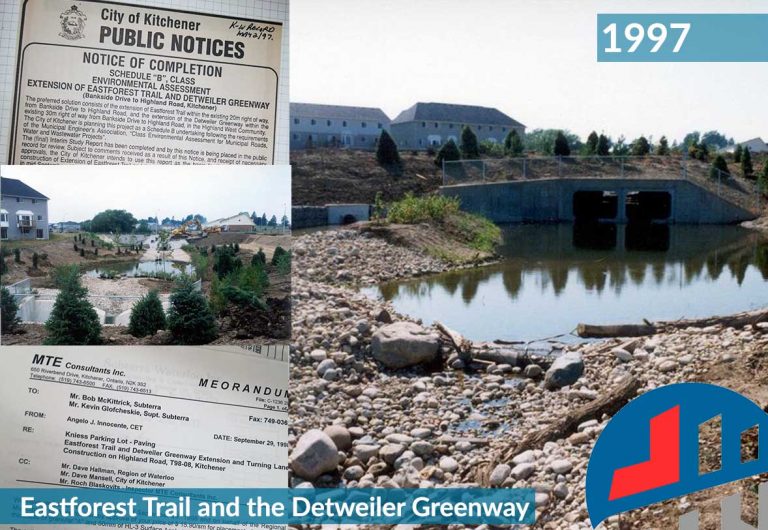 In 1997 we completed a Schedule B Class EA for the City of Kitchener for the extension of Eastforest Trail and the Detweiler Greenway in Kitchener. The purpose of the EA was to identify a preferred solution for a new roadway and a naturalized channel. As with many municipal projects in Waterloo Region, collaboration with the Region of Waterloo is key. On this project our Region contact was Dave Hallman. Years ago Dave made “the switch” to consulting and works within our Municipal Division today.

In 1997 we welcomed Ena McIntyre to the MTE team. Today Ena is a CAD Technologist who works with our environmental engineering teams. 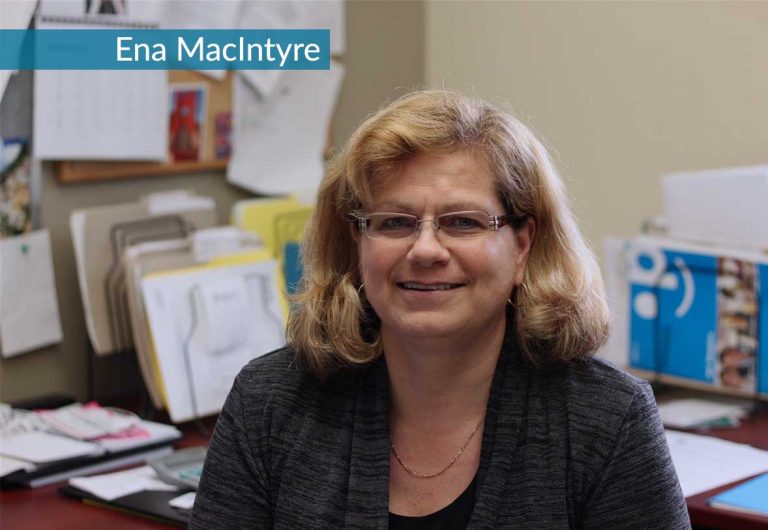 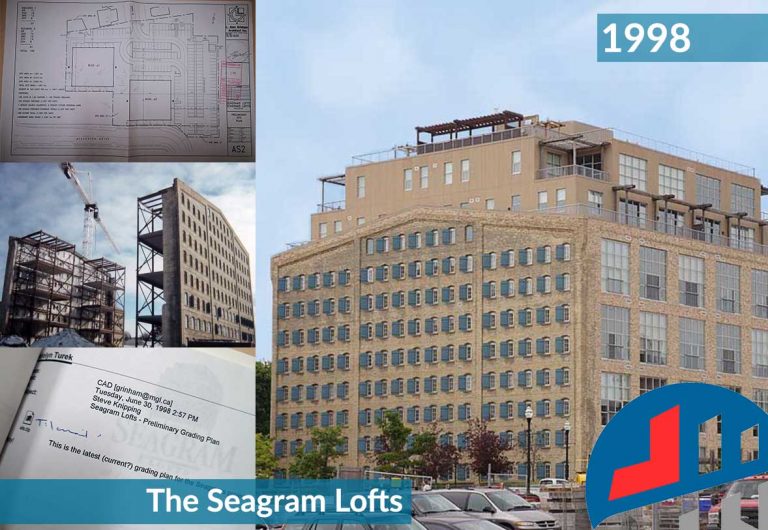 In 1998 we began working on the civil engineering design of The Seagrams Lofts project in Waterloo. This innovative project, designed by Grinham Architects, involved the conversion of the original Seagram Distillers whiskey barrel warehouse into 105 luxury condo units. The property features one 11-storey building and one seven-storey building. MTE was responsible for the civil engineering of the site.

The structural engineering was completed by Sze Straka Engineering who later joined MTE (more on that soon). Their scope of the project involved the phase-by-phase demolition of racking and re-construction of new foundations and building façades, which were maintained for historical preservation. As well, all services were re-constructed and barrel racking was re-milled onsite and used for stairs, doors, trim, panelling and railings.

In 1998 Dave Wilhelm and Bob Schaefer joined MTE. Today Dave is the Manager of our water and wastewater engineering team, and Bob is Designer working on our land development projects.

This is also the year we started using email for project communication. 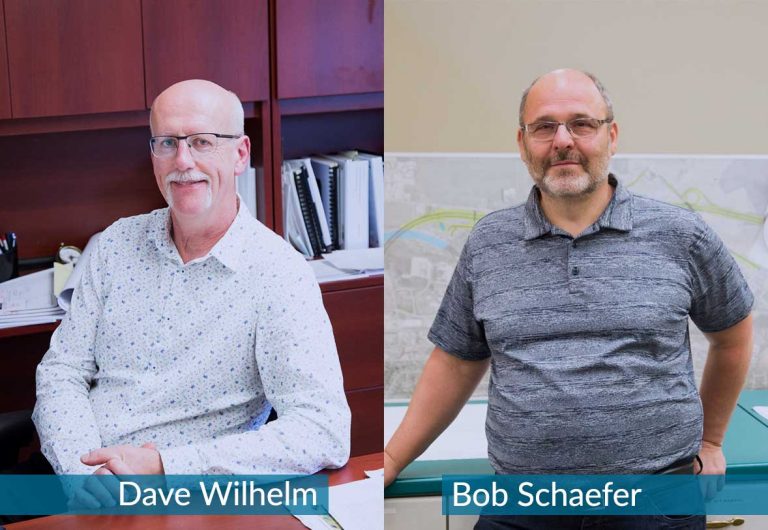 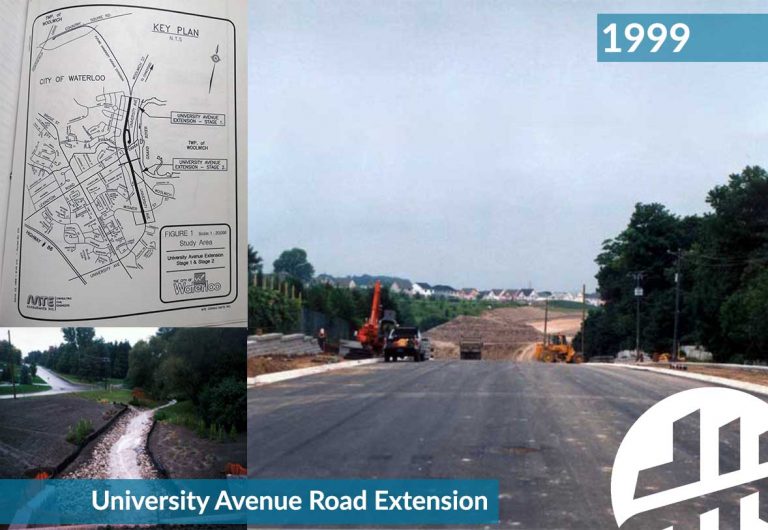 In 1999 construction of the extension of University Avenue began. The project would extend the City of Waterloo’s corridor from Wismer Street to Woolwich Street. Our municipal engineering team designed the new road, which included incorporating combined bike and horse carriage lanes, retaining walls, traffic signals and a large box culvert to accommodate a crossing of Colonial Creek.

Furthermore, this project was one of the first projects in the Grand River Watershed that involved a newly adopted policy for harmful alteration, disruption or destruction of fish habitat (HADD).

This was also the year that we welcomed Brian Hesch, Joanne McDaniel and Paul Douglas to MTE. 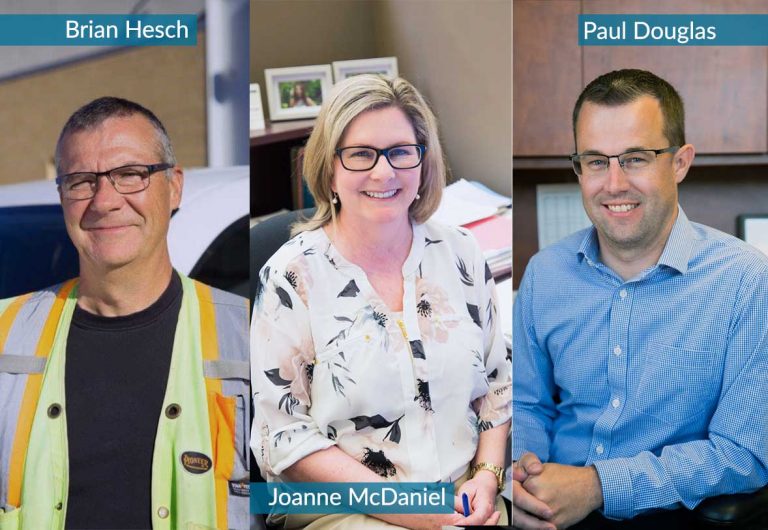